Heather is a character in the Over the Hedge franchise. She is one of RJ's best friends and Ozzie's daughter.

Heather is Ozzie's daughter and is a bit annoyed at his dramatic behavior. It is unknown who her mother was.

Throughout the film, she is embarrassed by her father for playing dead in response to even the slightest things that happen to him (such as a sleet of snow falling on his head).

However, near the end of the film, she uses this to trick humans (even Ozzie) into thinking she was dead.

Heather is friendly, caring, and thoughtful. However, she is annoyed by her father's behavior, but does understand why opossoms play dead.

Heather is a 16-year-old opossum. She has white and gray fur. The pads of her feet are light pink. She has a long black tail. Her nose is pink and her ears are black and speckled white and her eyes are blue. There is a considerable amount of shading around her eyes, particularly between her eyes and eyebrows. 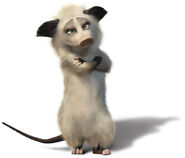 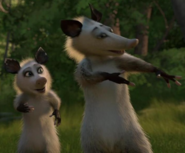 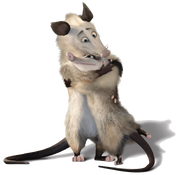 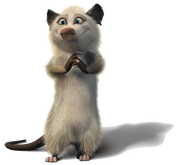 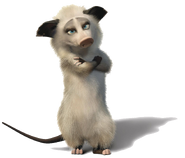 Add a photo to this gallery
Retrieved from "https://hedgecomic.fandom.com/wiki/Heather?oldid=10812"
Community content is available under CC-BY-SA unless otherwise noted.