Hammy is the tritagonist of the Over the Hedge franchise. He is one of RJ's best friends.

Hammy is a North American red squirrel who, at some unknown point in his life gained the ability to run extremely fast. He later eventually met Verne and became a part of the Hedge family.

Hammy is not like an average squirrel: He is basically insane, spouting random comments at different moments, incredibly hyperactive, and has an extreme craze for nuts (as well as sugary items, mostly cookies), often trying to find them, to no avail. However, Hammy also has a calmer side. He is goofy, hilarious, and funny.

Hammy is a slender American red squirrel. He has hazel eyes. 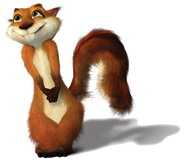 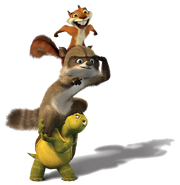 Add a photo to this gallery
Retrieved from "https://hedgecomic.fandom.com/wiki/Hammy?oldid=10420"
Community content is available under CC-BY-SA unless otherwise noted.