Gladys Sharp is the main female antagonist of Over the Hedge. She is the former president of Home Owners Association, Dwayne's leader, boss, and love interest, and Tiger's former owner.

Gladys Sharp is a businesswoman obsessed with order and cleanliness. She hates the wild animals, not just because she is disgusted and horrified by them, but loves long walks on the beach. But also because she thinks they might be spreading disease and lowering the property value of her home and community. Despite her hatred of RJ and the gang, she dotes on her cat.

Gladys wears a black dress suit on top of a red tank top. She has pale skin, short black hair, brown eyes, and she is very tall. She wears red lipstick. Her pajamas are red and she has bunny slippers.

After she was hit by the Depelter Turbo, she lost almost all of of her precious hair and became almost bald.

In Over the Hedge

At the start of the film, Gladys is the chairwoman of the Home Owners Association, obsessed with the quality of every home in the neighborhood. Gladys is seen talking on the phone while drinking a cup of coffee and driving her car to her home. After Gladys later talks on the phone, saying that she is the president of the Home Owners Association, she grabs the rest of her supermarket products that she carries them to her home. Gladys then makes contact with RJ and the rest of the gang on her porch and while she opens the door to check on her pet cat Tiger, she sees RJ and the animals frightening and promptly scares them away while angrily stating she that just cleaned up. Meanwhile, Gladys talks to Jannis, who has two children, and when Jannis leaves, she angrily swears vengeance on her.

Unfortunately for Gladys, the animals return many more times to steal food, which risks ruining the neighborhood. She then calls and hires Dwayne LaFontant as her henchman to kill RJ and his best friends. Gladys walks out of her home only to find an unconscious Ozzie laying on the floor. She announces that she has called Dwayne to murder the animals before they can get hurt like this. When Dwayne arrives, she tells him to kill the animals, but Dwayne fails at catching them after Gladys attempts to yell at him to murder Ozzie, who escapes to safety. Later, Gladys says that nobody cannot throw garbage cans on the floor, but the Spuddies can (dropped by RJ) falls on her car, causing her to escape to her house to safety. The food cache, with the fuel grill tied to it, lands on Gladys' car, destroying it in an explosion. That night, Gladys asks Dwayne to give her the Depelter Turbo so she can purchase it. The next morning, she wakes up and walks up to her room only to find Heather on her staircase. When she kicks Heather with her foot, apparently killing her, she calls Dwayne. Gladys is horrified when she discovers all of the animals roaming her house for food and she gets sprayed by Stella the skunk. After Dwayne captures the animals, except RJ, she tells him to deal with them very inhumanely.

Later on, the animals return to Gladys' home with Dwayne's van, only to destroy it. Enraged by the fact that her beautiful home is in shambles, Gladys charges the hedge that the animals are hiding in with her weed whacker. She is then frozen in time after Hammy consumes an energy drink, which allows him to move faster than the speed of light. He activates an illegal trap, the Depelter Turbo, which Gladys purchased to help eliminate the animals. Gladys ends up activating the trap and screams in rage (And likely in pain as well) as it incinerates her. After getting incinerated from the Depelter Turbo, she lost all her hair, as well as her clothes, were torn.

Afterward, she was fired from her job and was arrested by the police officers for the Depelter Turbo. She is last seen flying into a rage and putting up a fight against the officers arresting her for possessing the Depelter, which she knew was illegal to own in that state, while Dwayne quietly escapes from the police. It is likely that the officers eventually restrained her, and added resisting arrest and multiple counts of assaulting two officers and multiple cases of mass genocide to the charges against her, ensuring that she will almost certainly be facing a lengthy prison sentence.

In Over the Hedge: The Video Game

In the events of the video game, she gets released and her hair grows back, though the game is non-canon to the movie. After firing Dwayne, she hires a construction crew to take down the forest and another exterminator to get the animals. The crew starts at her house so she could build a pool in her backyard where the forest once was. However, the gang stops this by bringing endangered animals to the forest so the crew stops before they take down the forest. 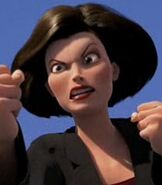 Gladys preparing to use the weed wacker against the animals
Add a photo to this gallery
Retrieved from "https://hedgecomic.fandom.com/wiki/Gladys_Sharp?oldid=10334"
Community content is available under CC-BY-SA unless otherwise noted.