Dwayne LaFontant is the tertiary antagonist of Over the Hedge. He is Gladys' henchman.

Dwayne is hired Gladys as her henchman to exterminate the animals before they "get injured" (even though that was just an excuse).

One day, Dwayne arrived and tried to kill Ozzie (who had faked dying), but the opossum fled into the hedge. Dwayne then smells Verne (whom he calls "Reptile") and bends over to capture Verne (who is under a car), but Verne already escaped back into the hedge to meet up with the other animals.

Dwayne installs a high-powered extermination system in Gladys' backyard, figuring she would insist on wanting it, regardless of its illegal status.

Later, when Gladys catches the animals in her house, Dwayne arrives and is able to capture the animals except RJ, who left to return the food to Vincent. Dwayne mockingly tells Verne he has just been "verminated". When RJ sees Dwayne driving away with RJ's caged friends, the raccoon has a change of heart at the last moment and decides to go save them. The impact knocks Dwayne out and frees the animals, who turn the van around to go back home. Meanwhile, RJ is chased by Vincent atop the van. Verne eventually manages to convince the other animals that RJ is trying to help them and they all turn to help RJ defend himself from Vincent. With no control, Dwayne's van eventually makes a jump and flies through Gladys' house. As Dwayne regains consciousness, RJ and the others flee into the hedge, with Vincent on one side trying to claw them and Gladys (who uses a weed hacker) and Dwayne (who uses a cattle prod to shock the animals) on the other. RJ and Verne then get an idea and have Hammy drink some soda and he makes the whole world freeze. After that, Hammy walks into Gladys' backyard, activates the Depelter Turbo, and then gets an idea and puts a little garden gnome behind Dwayne's foot. RJ, borrowing Verne's shell, uses himself as bait to lure Vincent into Gladys' backyard. Vincent, Gladys, and Dwayne fall into a pile as the Depelter Turbo comes on-line (due to them falling into the lasers), stinging them all.

Gladys and Dwayne are arrested for illegal traps. While Gladys fights the cops and beats them up, Dwayne quietly escapes and climbs over a fence, only to be bitten on the leg (presumably) by Nugent after stepping on one of the rottweiler's squeaky toys.

It is unknown what happened to Dwayne after the events of the film, but it could be possible that the police eventually found and arrested him, along with Gladys.

This article is a stub. You can help Over the Hedge Wiki by expanding it.
Dwayne is mean, rude, selfish, over-zealous, and conniving. Dwayne seems to have a crush on Gladys, but she doesn't like him very much.

Dwayne calls Gladys "Nancy" in a funny way to stop her complaining.

He is also very sarcastic. 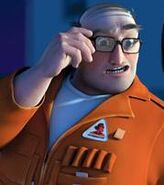 Concept art of Dwayne
Add a photo to this gallery
Retrieved from "https://hedgecomic.fandom.com/wiki/Dwayne_LaFontant?oldid=10891"
Community content is available under CC-BY-SA unless otherwise noted.